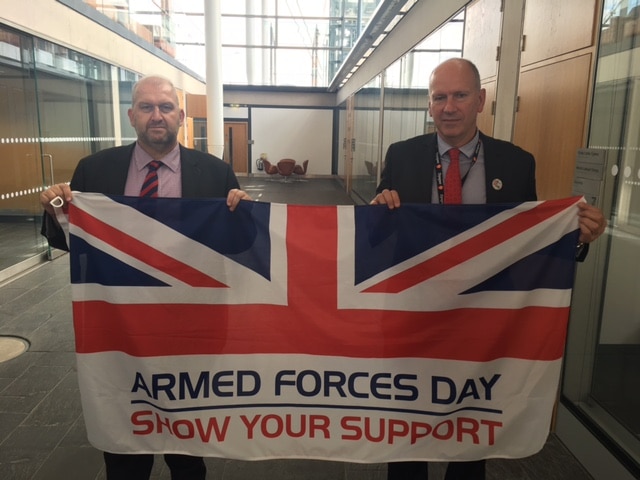 David Rees the Assembly Member for Aberavon is supporting Armed Forces day, showing gratitude to the women and men who serve and have served in the Armed Forces.  He recently met with Cabinet Secretary Carl Sargeant, to discuss support for service personal, veterans and their families.

David Rees AM will be joining people the length and breadth of the country who want to salute our forces personnel. The organisers of this year’s event are asking people to show their support by tweeting with the hashtag #SaluteOurForces or by sharing pictures of support, on the Armed Forces Day Facebook page https://www.facebook.com/armedforcesday

Armed Forces Day is on the Saturday the 25th of June.

David Rees AM said “Armed forces day is an important occasion for communities in Aberavon and across the country.  There are various events taking place across the region over the weekend and we all owe a big thanks to the organisers of for making sure that everyone in has the chance to show their gratitude, to the men and women of our armed forces, their families, veterans and cadets.”

“Armed Forces day is a great opportunity to show gratitude and respect to the armed forces, those that serve and those that have served as well as forces families.”

“It is also an opportunity to say a huge thanks to those organisations that do such great work to help our armed forces and veterans.  Groups like the Royal British Legion, Help for Heroes and so many others.”