Local AM, David Rees, has met with a Welsh Government Minister to raise his concerns following the publication of an Equality and Human Rights Commission report that has found that efforts to tackle child poverty in Wales are being “damaged” by UK government welfare and tax reforms. The report estimates there could be 50,000 more Welsh children in poverty by 2021 as a result of UK Governments policies.

Mr. Rees has met with the Welsh Government Minister for Children and Social Services, Huw Irranca-Davies, to discuss the report’s findings and the impact on children in his Aberavon constituency.

The EHRC has examined potential impacts UK Government policies since 2010, including the bedroom Tax, Universal Credit and cuts to Tax Credits.

Mr. Rees stated  “In Wales the Welsh Labour Government have worked hard to mitigate the worst effects of UK Government austerity.  This work is reflected in the report which shows that the predicted rise in child poverty in Wales of 8% will be lower than in England where it is forecast to be 11%.

Mr. Rees added: “I am really concerned that Welsh Government work to tackle child poverty is being completely undermined by UK Government policies.  I am well aware of the long term damage UK Government policies are doing to the life chances of young people in Aberavon and oppose their austerity measures which are impacting upon our most vulnerable people.”

“It is deeply worrying that this report just confirms the impact of austerity on what we all see around us and the huge growth in the number of foodbanks that now exist in Wales.”

“It is now time for the UK Government to reflect and listen.” 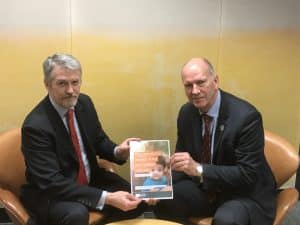