David Rees AM Shows Support for Dementia Care in Wales 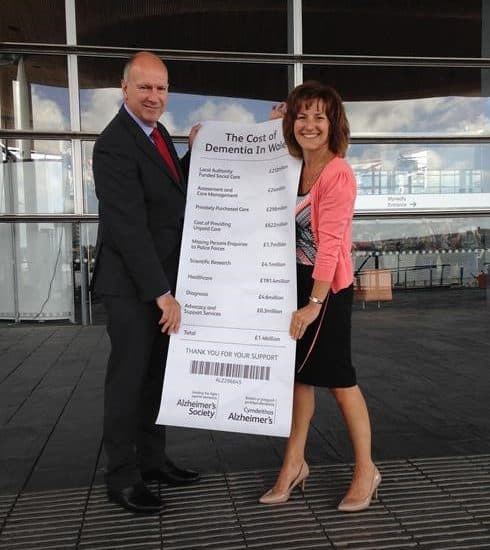 Aberavon AM, David Rees today attended the launch of a new report by the Alzheimer’s Society, The hidden cost of dementia in Wales which highlights that families bear the hidden costs of dementia in Wales. David Rees joined Sue Phelps, Director of Alzheimer’s Society in Wales and at the National Assembly for Wales to mark the report’s release, which is the first of its kind to provide a financial breakdown of the cost of dementia to society in Wales and to show his support for people suffering from dementia and their families and carers.

The hidden cost of dementia in Wales report reveals that in 2013 the total cost of dementia in Wales was £1.4 billion, an average cost of £31,300 per person per year. The report found that people with dementia, carers and their families currently shoulder around two-thirds of the cost themselves. This amounts to £298 million for private care social care, and equivalent to £622 million in providing unpaid care to people with dementia.

“There are 45,000 people living with dementia in Wales and dementia is a challenge that cannot be overlooked. Costs of dementia will continue to rise unless we have a system that better supports both people with dementia and their carers. We are delighted that David Rees has shown his commitment today towards supporting people in Aberavon and across Wales with dementia.”

David Rees attended the drop-in session held for Assembly Members at the National Assembly for Wales to discuss the findings of the report.

David Rees said: “Today I met with the Alzheimer Society to discuss the findings of the report and to show my support to people living with dementia and their carers in Aberavon. With a growing number of people being diagnosed and living with dementia, it’s becoming of increasing importance that we find a way of working in collaboration to meet the challenge dementia presents.”