Aberavon MP and AM urge UK Government to stand up for 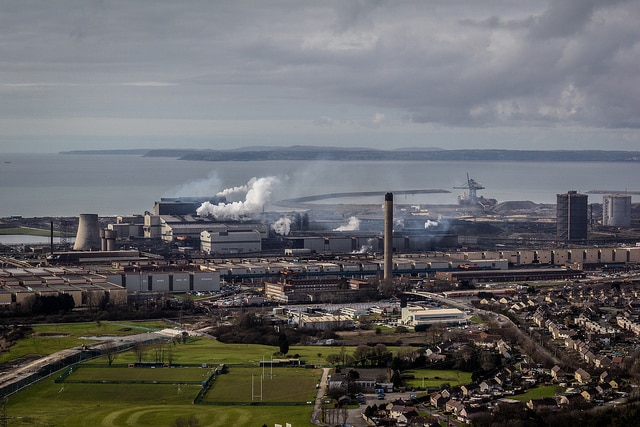 Aberavon MP Stephen Kinnock and AM David Rees are pressing the UK government to do more to support the crisis-hit Port Talbot steel works.

Tata Steel today announced that the Port Talbot works will lose 750 of its almost 4,000 workers, in sweeping job cuts that are part of a make-or-break rescue plan.

“This announcement is a devastating blow for all of the workers at the plant and their families and in particular to those who will lose their jobs. We must do everything we can to support those affected and I am seeking an urgent meeting with the First Minister to ask for the Welsh Government to put into place what measures it can to do that. I’m also calling on the UK Government to provide financial support and assistance to all who will be made redundant following this announcement and to any businesses affected.

“We also need to see action taken to keep the plant operational for long term viability and the UK Government has to decide whether it wants a steel sector that can compete in the global market or not. To date we have seen no evidence from the Secretary of State of an industrial strategy or support for steel making in the UK. I, and the Welsh Government, have called for action on high energy costs for many years and the Steel industry has still not received any financial help yet, only promises. It is clear that to date this Tory Government has no desire to intervene and help our steelworkers but I urge them to change their minds and pro-actively support the UK’s steel industry.

“I have met with local trade union representatives and management at Tata in Port Talbot to discuss the future of the plant and it is clear that whilst they will work together to develop a plan that will allow the plant to survive, action must be taken at a UK Government level to tackle the challenges facing the steel industry.

“Ever since I can remember the steelworks has been central to our local economy and the livelihoods of many people, not just in Port Talbot but across the region. I went to school with many current and former steel workers whilst having taught others and I know the impact this will have on them, their families and our communities. We must all work together to secure the future of the steelworks and of our local economy to ensure a future for our town.”

“I deeply regret today’s announcement. The Port Talbot steel works is the beating heart of our economy, and of our community. Our thoughts are with those who will be most directly affected by this terrible news, and we must now do all we can to rally around them and their families.

I have been pressing the government for several months to roll up its sleeves and take action on the dumping of Chinese steel, the extortionate business rates and the unhelpful procurement policies that are major road-blocks for the steel industry. Unfortunately, all we have heard from the Secretary of State and his team are warm words and excuses.

Moreover, we also need a clear commitment from the government in terms of support to those who will be made redundant as a result of today’s announcement. What measures will the Secretary of State be putting in place to ensure that they will be receiving adequate financial support, and also assistance in finding new jobs?

I will keep pressing the government on these points, and will also continue to support Community Union and Tata Steel, who are working closely together to ensure that the Port Talbot plant withstands this storm, and goes forward to a brighter future.”

Gwenda Thomas, AM for the neighbouring Neath Constituency, said,

“The news of these major job losses comes as a real blow to the workers affected by these cuts in Tata Steel’s Port Talbot plant, and our thoughts are with these employees and their families affected by the news. Job losses on this scale will undoubtedly affect, not only Port Talbot, but also the surrounding areas, such as Neath.

There will, as well, be attendant job losses in the local economy with contractors, suppliers, local companies and businesses affected.

There is a rich tradition of making steel on this site for over a century, and the men and women in Tata who work there have striven hard to make this plant highly efficient and technologically advanced. It is due to current economic conditions that these job losses have occurred, and we agree that this is a final wake-up call to the Westminster government and European Commission.

Our offices will do all that we can to mitigate the effects of these job losses, and will closely liaise with the Welsh Government, Tata Steel and the unions to help these steelworkers.”

“The job losses in TATA at Port Talbot and Trostre are devastating for South West Wales. Steel production has been a major part of the economy in the region since the Abbey works opened in 1951.

“These job losses will have a knock on effect for the contractors, apprenticeships and other industries that service the plants. For every job lost at TATA, four others will be affected in the local communities. Everyone either works in TATA or knows somebody who does.

“There are many people who live in Neath and work at Port Talbot or Trostre. Indeed my father worked at the Steel Company of Wales and as a schoolgirl I played hockey for SCOW.

“As a member of UNITE and GMB; and with Nia Griffith and Stephen Kinnock as members of the All Party Parliamentary Group for Steel we have urged the UK Government to step in and support the steel industry, but to no avail. This is a very sad day for steel production and the communities of South West Wales.”