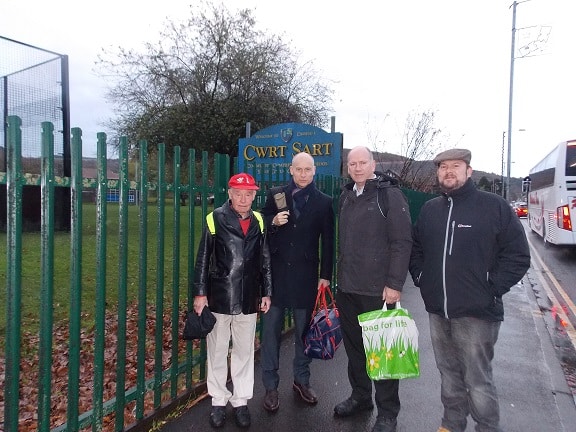 Last Friday Aberavon’s AM and MP, David Rees and Stephen Kinnock respectively, walked the proposed new route to school that pupils from Briton Ferry will be expected to walk to the new Ysgol Bae Baglan on Seaway Parade, Sandfields following the closure of Cwrt Sart Community Comprehensive School. Both David and Stephen have been very vocal in their campaign to ensure that pupils from the school have a safe journey to the new school and they wanted to evidence their concerns that the current proposed route is not safe for pupils nor is it suitable especially in inclement weather.

They were joined on the walk by Cllr Hugh James from Briton Ferry, local residents and Suzy Davies AM who is supporting their campaign. They set off from Cwrt Sart Community School at 7.40am and did not reach Ysgol Bae Baglan until 8.55am. They walked the route at a brisk pace without stopping. However, along the route are the temptations of many local shops and McDonalds, where pupils may stop off for a break and, or to purchase refreshments thus adding to the 1hour and 15 minutes it took the group to walk on Friday. Both David and Stephen have once again called for the local authority to take action on the concerns of all parents who will be required to send their pupils to the new Bae Baglan school to ensure that appropriate transport is provided in order for pupils to attend school safely and to be able to take full advantage of the community feel that the school will be providing.   It is also important to ensure pupils will have access to transport if they take part in after school activities, a vital element of young people’s education, so that no child will be asked to walk those routes alone.

David Rees said “It was clear as we walked one of the possible routes that children will have to face busy roads and inclement weather in many exposed places as they make their way to the new school from next September.  I urge the local authority to rethink their policy and provide transportation for these pupils who are being asked to walk to a new school following the council’s decision to close Cwrt Sart.”

He added “it is fantastic that pupils will be educated at a state of the art school but it’s vital that we ensure they can get there and home safely to benefit from these 21st century facilities.”

Stephen Kinnock stated “The walk on Friday morning was over an hour long in atrocious weather – wind, rain and even hail. Having done the walk it is absolutely clear to me that transport needs to be provided for Cwrt Sart pupils who in September will be attending Ysgol Bae Baglan. Either a free bus or a heavily subsidised bus should be made available so that hard working families in Briton Ferry can afford to send their children to school. We cannot have children spending such a long time walking to school and then sitting in lessons in wet clothes. It is not good for learning or for school morale.

“I welcome the building of a 21st Century school, it is excellent that we are investing in our children’s future. However, the closure of Cwrt Sart is disruptive and measures need to be put in place to mitigate this disruption.”

Mr Rees also expressed concern regarding the same issue for children who currently attend Ysgol Gynradd Gymraeg Tyle’r Ynn and who will transfer to the new Ystalyfera South school on the site of the former Sandfields Comprehensive.  Many of these pupils, who currently would have transport to Ystalyfera, will now be attending this school and are likely to face the same expectations of having to walk to that school.

Mr Rees intends to continue walking a variety of routes that the children would have to take to reach the new school, including from the further points in Sandfields East, to highlight the hazards that pupils will face in the morning and late afternoon as children go to and from school.