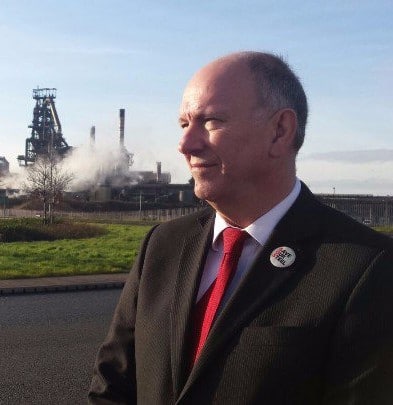 Following today’s announcement of the suspension of the joint venture between Tata Steel and Thyssenkrupp AG, David Rees, Assembly Member for Aberavon, and Stephen Kinnock Member of Parliament for Aberavon have spoken to Tata Steel UK to arrange an urgent meeting to discuss the future of steel making in Wales, in particular the future of steel making at Tata’s Port Talbot plant.

Port Talbot is the largest steel making site in the UK and over the last several turbulent years, Steel workers across Wales have given their whole hearted commitment to the steel industry, including an agreement to reduce their pension benefits, and they are now, once again, concerned over the future of the Port Talbot works. The announcement today that the merger with Thyssenkrupp AG has been suspended comes following many years of instability over the future of the plant at Port Talbot. It was hoped that the JV would bring stability to the sector here in Wales, however, today’s announcement (Friday 10th May 2019) extends the rollercoaster that steel workers, their families, their communities, and the supply chain have been experiencing. Unions and Aberavon Labour politicians are now calling on Tata Steel to ensure the workforce that the future of the plant is not at risk.

David Rees AM said; “Today’s announcement that the joint venture has been suspended and unlikely to proceed once again places a cloud over the future of steelmaking in Port Talbot.  It is now critical that TATA Europe puts forward its plans to ensure steelmaking in the UK is sustainable and that the investment promised when steelworkers agreed their pension changes will be delivered.  The fantastic workforce in the Port Talbot steelworks have demonstrated their commitment to the plant over the years and they now need TATA to give them the confidence that there is a future for the works and the industry in Port Talbot.

“I have spoken to TATA today to seek an urgent meeting to discuss the implications for steel making in Port Talbot following this announcement and a clear indication of what actions it will now take forward to remain a major force in steelmaking across the UK.  It is essential that Port Talbot remains at the heart of any future plans.  I have also spoken to the Minister for Economy at the Welsh Government, Ken Skates AM, calling for their support at this time.”

Stephen Kinnock MP said: “Following this announcement, we must now look to the future. It is vital that we gain the assurances the local community need from Tata Steel that planned investments in the Port Talbot works will still go ahead, in order to secure the long-term sustainable future of our steel industry.

Tata must urgently make good on their commitments and investment plans, so that the jobs and livelihoods of our steelworkers and their families can be safeguarded.

And the UK government must now act to establish a steel sector deal which is supported by action on reducing the burden of energy costs on steelmakers.”

“Port Talbot steelworkers make the best steel that money can buy. It is essential that they are supported by Tata Steel and the UK Government, so that they are able to compete on a level playing field.”